54 years ago today Major League Baseball owners and their general managers stared at the future of their game and blinked.  As it turned out, more than a half century later, much of what they wrestled with would become the norm.

On Nov. 5, 1964, the baseball entourage met in Phoenix, AZ.  The confab was held two days after President Lyndon B. Johnson won a landslide victory over GOP opponent Barry Goldwater.  Presidential politics was not on their mind, however.  Owners were more concerned with a ballot measure that failed by a nearly 3-to-1 margin in California.
Proposition 15 would have permitted “pay-TV” in the Golden State.  Hollywood stars, Henry Fonda and Dana Andrews among them, campaigned for the measure that was resoundingly defeated.  The initiative was mostly promoted by and entity known as “Subscription Television,” which already had more than 6,000 subscribers committed to the concept of paying to view their television.
Two investors in Subscription TV were the Los Angeles Dodgers and San Francisco Giants.  One of the reasons Walter O’Malley hightailed it out of Brooklyn was the potential of a lucrative pay-TV market in Southern California.  It’s easier than a Sandy Koufax fastball to see where this issue was heading.   If O’Malley and Giants owner Horace Stoneham were about to reap millions for their product, other owners – who were giving their product away for free on over-the-air television – wanted in.  All of this came to a screeching halt, however, on Nov. 3, placing the owners back at first base on the concept of selling their games on television.

Of course, within a few years, games on cable TV would become the norm, with the Dodgers leading the way.  In 2014, the club signed a controversial 25-year, $8.35 billion TV contract with Time-Warner.

MLB owners had other things on their mind at that meeting, among them the baseball schedule.  Because of expansion in the early 60s, the season had gone from 154 to 162 games.  Some owners thought it excessive.  The 162-game season lives to this day.

Interleague play also dominated the agenda and of all clubs the New York Yankees were the leading proponent.  Coming off their fifth consecutive American League championship, who would have thought the snobbish New York Yankees would be pursuing a regular season matchup against their crosstown rivals, the “lowly” New York Mets?  Turns out, the Yanks were 30 years ahead of their time.

Who knew, more than a half century ago, owners would be meeting to discuss issues that are considered the norm in baseball today?  Now if only they could do something about that 162-game schedule.

President Donald Trump stirred up a hornet’s nest with another one of his tweets, this time second guessing Los Angeles Dodgers manager Dave Roberts Saturday night.  Trump took Roberts to task for lifting starting pitcher Rich Hill in Game 4 of the World Series.

But long before there was Donald Trump, there was John McGraw, Hall of Fame manager of the New York Giants.  Nicknamed “Little Napoleon,” McGraw managed the Giants from 1902 to 1932, winning three World Series and 10 National League pennants.

McGraw, however, was not averse to criticizing managers of other clubs.  And so it was, in the Oct. 9, 1927 edition of the New York Times, on the day after the vaunted 1927 New York Yankees completed a four-game sweep of the Pittsburgh Pirates in the World Series, McGraw was out there criticizing Bucs manager Donie Bush.  Down 3-0 entering the seventh inning of the fourth game, the Pirates placed runners at first and second with nobody out.  That’s when Bush ordered future Hall of Farmer Lloyd Warner to bunt, illiciting McGraw to criticize the strategy.

“John McGraw was much upset when Lloyd Waner was ordered to bunt with men on first and second and nobody out in the Pirates seventh,” noted the Times.  “The Pirates got only two runs out of it and McGraw thought they might have made more if Waner had been allowed to hit.”

So 91 years before Trump, there was McGraw, quoted in the New York Times.  Presumably “Little Napoleon’s” Twitter account was not working that day. 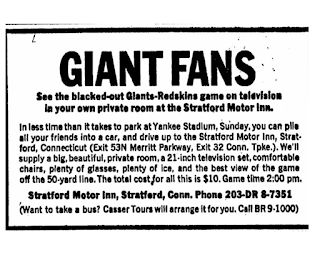 Back in the day – long before the television-saturated era in which we now live – not every NFL game was on television.  For example, in the early 1960s – when the New York Giants were of championship caliber – their home games at Yankee Stadium were not televised in the New York market.

How to follow the Giants home games?  Well, there was radio.  The medium was around back then too and even in 2018 it is still a great way to follow a football game.   But Giants fans wanted to watch their favorites like quarterback Y.A. Tittle, no matter how much fun it was listening to a game on the radio.  (In 1962, by the way, the “Voice of the Yankees,” Mel Allen, broadcast Giants games on radio and Ballantine Beer was the sponsor.). If you lived in New York, however, and didn’t have a ticket to a home game at Yankee Stadium, you were out of luck.

Enterprising hotels and motels came to the rescue – especially those located in Connecticut.  As one ad in the Oct. 26, 1962 edition of The NY Times implored, take the short drive to Connecticut to watch Big Blue.

And many people did.  Some in New York, even went so far as to erect “high-powered” TV antennas atop their apartments in the hope of pulling in Hartford’s CBS affiliate, which televised the games.  Most of their attempts, however, ended with interference.

These days the New York Giants – who play in New Jersey – are readily available to watch on brilliant HDTV both home and away.  However, with another poor season droning on, there’s not much to see, when it comes to “Big Blue.”  Better that interference return to the screen, when a Giants game is televised. 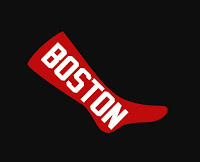 The Boston Red Sox are relentless. They are, as their record reads, the best team in baseball. The Red Sox are showing the Los Angeles Dodgers what the rest of the American League has learned, when you score against them, they answer right back. That is the ultimate sign of a winner.

I don’t know who is going to win this World Series, but I do know this, the Red Sox are the best team in baseball, until proven otherwise.