Lindsay Berra tweeted a great picture this weekend of her granddad Yogi, batting in the 1963 World Series against Don Drysdale of the Dodgers.  The tweet was an answer to the much-criticized uniforms being worn by MLB players this weekend with their nicknames on the back of the jerseys.  I haven’t met a person yet, who likes the uniforms, and many have complained it’s a shame this rare meeting between two of the game’s most storied franchises, the Yankees and Dodgers, doesn’t feature the clubs’ iconic uniforms.  Thus the great tweet by Lindsay. 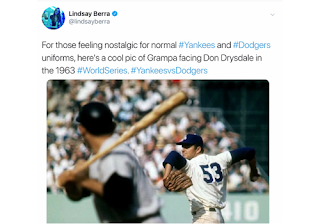 The picture itself contains many story lines.  It was Yogi’s last World Series at bat.  For a player who holds the record for most World Series games played, 75, that is significant in its own right.  Throw in that it was Yogi’s lone appearance in the ‘63 World Series and it gets even more intriguing.  Now consider what Yogi must have been thinking, during that at bat, and it blows your mind; because he was one of a select group, who knew he was about to become the next manager of the New York Yankees.
In spring training that season, the Yankees set the wheels in motion to make major changes in the front office.  Roy Hamey wanted out as General Manager.  He agreed to leave the position after the 1963 season.  Manager Ralph Houk would become the GM and Yogi would retire as a player – he actually was a player-coach in 1963 – and become the new manager in 1964.  That this plan of succession never leaked during the season, in the nation’s number one media market no less, is testimony to the discipline of the principals involved.
As for Yogi’s at bat, he was pinch-hitting for pitcher Jim Bouton in the top of the eighth inning of Game 3.  It was Saturday, October 5 and Yogi lined out to Ron Fairly in right field.  The Dodgers swept the series in four.  Also of note were the times of the four World Series games- 2:09, 2:13, 2:05 and 1:50.  In other words, the combined times of the last three games were about what it took for the Yankees and Red Sox to play that first game in London earlier this season.
Now if they would only ditch those uniforms.  And shorten the games.