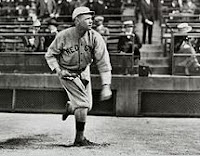 It was the day after, Friday, May 7, 1915.  The New York Times was heralding the New York Yankees comeback 4-3 win over the Boston Red Sox, before nearly 5,000 fans.  But a key component to the story was a Red Sox pitcher named Babe Ruth, who hit his first big league home run.

In the Times story, written without a byline, here was the lead:
“Those Yanks won another game at the Polo Grounds yesterday, after fighting the Boston Red Sox tooth and nail for 13 innings.  The score was 4 to 3.”

In the game story, the Babe received his due:
“For Boston, the big left-handed pitcher, Babe Ruth was all that a pitcher is supposed to be, and some more.  He put his team into the running in the third inning by smashing a mighty rap into the upper tier of the right-field grandstand.  Ruth also had two other hits to his credit.  His pitching throughout was of high-order and it was only through the highest kind of effort that the Yanks were able to break through his service.”

Ruth pitched the distance, 12.1 innings, and absorbed the loss.  Two of the four runs he allowed were earned.  He permitted 10 hits, walked three and struck out three, evening his record at 1-1.  Ruth would finish the season at 18-8 on the mound, after going 2-1 in his initial big league season in 1914.

But let the record show, his first major league home run – he would hit four in 1915 – came against the New York Yankees.   And as trite as it may sound, after that date, the rest was history.