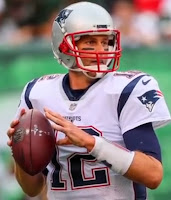 As the New England Patriots bask in the glow of another big victory, this one over the Minnesota Vikings on Sunday, 24-10, I am reminded of the prediction I made last season, after they lost the Super Bowl to the Philadelphia Eagles.  I predicted on a morning radio program where I was a co-host: “The Bill Belichick and Tom Brady era will never win another Super Bowl.”

Despite a tremendous win over the Vikes, I am sticking by that prediction.  Nothing against Brady – one of the all time great quarterbacks – nothing against Belichick – arguably the greatest NFL coach – but the clock has run out on this dynamic duo.  Brady is 41 years old.  I don’t care what diet he is on, what lifestyle regimen he follows.  You cannot stop age and 41 is 41 no matter how you slice it.

It pains me to write this, because I like Belichick and Brady.  They are one of sports all time great duos.  It’s just that Brady – despite the Pats 9-3 record – has lost a step.  And the Pats – who play in a weak division – have flaws.  That’s why I picked the Pats to beat the Eagles in last year’s Super Bowl.  I thought it was the duos last great chance.  A final moment to ride out in a blaze of glory.

Now the Pats are poised to make another run, but other clubs are looming.  The Kansas City Chiefs, for example, are younger, lurking and ready to unseat the defending AFC champs.  Don’t count out the Pittsburgh Steelers.  And the Houston Texans are a team with which to be reckoned.

It’s not that the Pats aren’t good.  They are better than good and playoff bound once again.  But Brady is a year older and the Belichick-Brady magic, once a certainty, has lost its glow, despite that impressive win over Minnesota.

I hope I am wrong, but the only area immune to Father Time, is Father Time.  Everyone else is fair game and the clock is ticking on Tom Brady, who I predict has won his last Super Bowl.