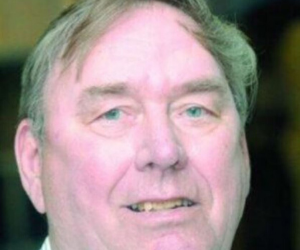 Owen Canfield died over Thanksgiving Day weekend, three months shy of his 86th birthday. I lost a dear friend. He and his late wife Ethel and their 10 children took me into their family, always making me feel welcome in their home on Woodbine St. in Torrington.

In his obituary, it was mentioned how many major sporting events Owen – a seven-time recipient of the Connecticut Sportswriter of the Year – covered. He was at Augusta to write about the Masters, at Yankee Stadium for Reggie Jackson’s three home run World Series game and in Atlanta for Hank Aaron’s home run to break Babe Ruth’s record.

In reading about those events, I was reminded how many times his sons and I took trips to Yankee Stadium. Those were in the days, when you could hop in the car and go to the Stadium and buy good seats at the ticket booth to watch a game, without breaking the bank; the days of Reggie, Catfish, Goose, Thurman and Billy. On many of those trips, Owen would tag along with his portable typewriter – they didn’t have laptops back then – and cover the game for the Hartford Courant. How cool it was to be driving Owen to the ballpark and then reading this award-winning writer’s column the next day in the paper.

In 1976, Owen’s sons Owen and Kevin and I planned an eight-day trip to eight major league ballparks. We traveled by train, plane and bus to Chicago’s two ballparks, Milwaukee, Detroit, Cincinnati, Pittsburgh – where I botched a picture with legendary Pirates’ broadcaster Bob Prince – Philadelphia and of course, Yankee Stadium. Owen turned our journey into a big feature in the Courant.

How many people remember that it was Owen who was the voice who pushed for Hartford to get a professional baseball club, preferably in the Eastern League? “It was always my dream to have the Eastern League made up of as many teams as possible from state capitals,” he once told me. Owen wrote a cover feature in the Courant’s then-Sunday magazine “Northeast,” devoted entirely to why Hartford should land a pro baseball team. Sadly, he never made it to Dunkin’ Donuts Park, but the success of the Hartford Yard Goats came as no surprise to him. He knew 30 years before that baseball would work in Hartford.

Owen even made me a part of the book he wrote about the New England Blizzard, the most successful franchise in the American Basketball League, the forerunner to the WNBA. That first year in the ABL, the Blizzard, which included UConn icons Jennifer Rizzotti, Kara Wolters and Carla Berube, had a difficult time winning games. While broadcasting their games, I promised the team, if they won five straight, I would shave my mustache. Wouldn’t you know, they won their final five games of the season. Owen included a picture of me getting my mustache removed at center court at the Springfield Civic Center.

I loved to talk sports writing and broadcasting with Owen. He was always supportive of my broadcasting and writing career, whether it be in our conversations or in one of his columns in either the Courant or the Register-Citizen. He told me it was easy to be a columnist who ripped a subject, but the true mark of a good columnist was to talk to your subject with respect; be thoughtful and try to consider the entire person. He also told me that a good columnist gave the reader some insight they weren’t expecting, when they read the paper. The outpouring of grief and love, since his death, is evidence he followed his own advice.

Owen and I last talked before the final two games of the World Series. After updating me on his health and reminding me, as he had reminded me in our previous conversation, that he was not afraid of death, we talked about how we were both rooting for the Washington Nationals to comeback and win the Series. We wanted the Nats to win, mostly because of Stephen Strasburg, who had pitched for the Torrington Twisters in the NECBL. As usual, Owen made me feel better, than before we had talked.

I will miss our conversations and that resonant voice of his on the voicemail: “Dan. Owen. Call me back.” I will miss his wonderful sense of humor and that great laugh that seemed to erupt from deep in his stomach.  I will miss our talks that extended beyond sports and revolved so much around family and how proud he was of his children, their spouses, his grandchildren and his great-grandchildren. I will miss our talks that were always uplifting, particularly if I was going through a down period. But as I shed yet another tear over his passing, I will thank God how lucky I was to know Owen and call him a dear friend.