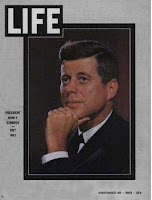 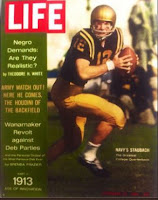 Roger Staubach was supposed to be on the cover of LIFE magazine, 55 years ago.  The Navy quarterback was having an outstanding season in 1963.  The cover was already printed and the caption under Staubach read: “Navy’s Staubach, the Greatest College Quarterback.”

Staubach was having a sensational season and so was Navy, ranked number two in the nation.  The Midshipmen were coming off a 38-25 win at Duke, their first win over the Blue Devils in nine years.  Staubach had another huge game, gaining 194 of his team’s 430 yards, including a touchdown run.  The Cincinnati native also broke two Navy records that day, for pass completions by a quarterback in a career (95) and passing yardage in a season (1,319).

Staubach had become the talk of the nation. In two weeks Navy would play powerhouse Army and the President of the United States would be in the stands.  As producer Jack Ford reported in his documentary “Marching On,” this president loved college football and had planned on attending the Army-Navy game for a third straight season.

It was not to be.  On November 22, six days after Navy’s win over Duke, President John F. Kennedy was assassinated in Dallas.  There was talk of cancelling the game, scheduled for Nov. 30, out of respect for the Kennedy family. Tradition also had it that the military should observe a 30-day mourning period.  But when former First Lady Jacqueline Kennedy got word the service academies were pondering a cancellation, she let it be known President Kennedy would have wanted the game to be played.  It was moved back one week to December 7.

That day, the normal pomp-and-circumstance that preceded an Army-Navy game was abandoned, replaced by a tribute to the slain president.  With more than 100,000 fans in attendance at Municipal Stadium in Philadelphia (later renamed JFK Stadium), Staubach helped lead Navy to a 21-15 victory.  Staubach, named the Heisman Trophy winner the day after President Kennedy’s funeral, had to share the headlines with fullback Pat Donnelly who rushed for all three Navy touchdowns.

Upon his graduation, Staubach served in the Navy, including a tour in Vietnam, before he was selected in the 10th round of the 1969 draft by the Dallas Cowboys.  He led Dallas to five Super Bowls, including two championships.  He would make the cover of numerous magazines, except one, the LIFE edition slated to be published on Nov. 29, 1963.