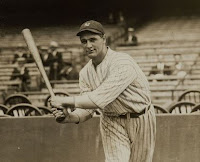 On Tuesday, May 2, 1939, before the game between the New York Yankees and Detroit Tigers in Detroit, Lou Gehrig took himself out of the line-up.  Thus ended his then record streak of playing in 2,130 consecutive games.

The papers the next day were filled with stories of Gehrig’s streak coming to an end.  A wire service photo made the rounds of Gehrig standing in the dugout with his successor, Babe Dahlgren.  New York Times reporter James P. Dawson also noted in his story that Gehrig succeeded Wally Pipp, who was benched by manager Miller Huggins in 1925 “to make room for the strapping youth fresh from the Hartford Eastern League club to which the Yankees had farmed him for two seasons…”

Gehrig’s dismal spring training in 1939 and early season woes through the Yankees first eight games made his self-benching inevitable.  Yankees manager Joe McCarthy told the media Gehrig wanted to meet with him immediately after the manager arrived by plane from his Buffalo home, following a day off. “Lou just told me he felt it would be best for the club if he took himself out of the line-up,” McCarthy noted, during his extensive comments to the reporters gathered around him.

Gehrig also spoke, telling the media “I decided last Sunday night on this move.  I haven’t been a bit of good to the team since the season started.  It would not be fair to the boys, to Joe or to the baseball public for me to try going on.  In fact, it would not be fair to myself, and I’m the last consideration.”

The news about Gehrig led to quotes from notable baseball personalities, including Hank Greenberg and Everett Scott, the player who held the consecutive game playing streak before Gehrig at 1,307.
Coincidentally Pipp, a Michigan business man, happened to be in Detroit on the day Gehrig announced his benching.

As the Yankees captain, Gehrig brought the line-up card to home plate before the game.  After the meeting ended, it was announced over the P.A. system that Gehrig would not be playing, ending his streak.  He received a standing ovation, as he returned to the dugout.

At the time, Gehrig had not been diagnosed with ALS.  Gehrig thought he had lumbago and later was  treated for a “gall bladder condition” after the 1938 season.  It was even thought that he would return to the line-up at some point in 1939.  The Times speculated “Gehrig’s withdrawal from today’s game does not necessarily mean the end of his playing career.”

The first place Yankees clobbered the Tigers without Gehrig, 22-2 in a game which took 2:22 to play. Gehrig’s replacement, Dahlgren, went 2-for-5 with a double, home run and two RBI in front of 11,379.

Gehrig, of course, never played another game.  He gave his memorable “luckiest man in the world” speech in between games of a doubleheader at Yankee Stadium on July 4.  He died on June 2, 1941.