The New York Yankees will not put a timetable on when slugger Aaron Judge will return to their lineup, following his latest injury.  Who can blame them.  I’m no doctor, but the guess here is he will not return, until June 15 at the earliest.

On Saturday against Kansas City, after homering earlier in the game, Judge left in the sixth inning after suffering an oblique strain.  On Sunday, manager Aaron Boone called it a “significant strain” and Judge was placed on the 10-day IL.

On Sunday, Lindsay Berra tweeted that she once wrote a story about oblique strains and that on average it takes a player 27 days for the injury to heal. 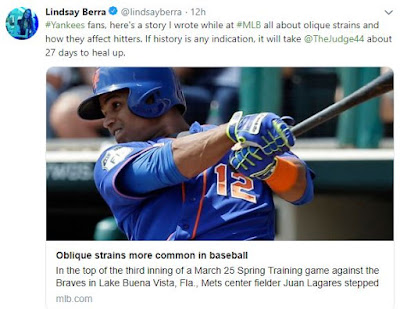 Far be it from me to disagree with Yogi’s granddaughter, but considering the way things are going for the Yankees and even looking at Judge’s wrist injury last year, where he was supposed to be out three weeks and ended up missing seven, my guess is the Yankees will be minus Judge double the time Berra predicted, if not more.

Meanwhile, the Yankees keep on winning with most of their starting lineup on the IL, proving that for some players, when one door closes, another door opens.