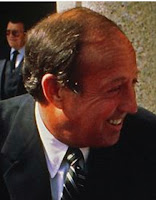 NFL Commissioner Pete Rozelle was widely criticized 55 years ago for not cancelling the league’s games the Sunday after President John F. Kennedy was assassinated.  The AFL wasted little time in announcing its games would not be played on Nov. 24, but Rozelle reportedly made the decision to go forth with the regularly scheduled games, even though rights holder CBS announced it would not carry the games.

“It has been traditional in sports for athletes to perform in times of great personal tragedy.  Football was Mr. Kennedy’s game.  He thrived on competition,” Rozelle stated in a press release.

The commissioner supposedly lobbied the team owners on whether the games should be played but there is no evidence to back up that claim.   What is known is that many fans protested, some who had tickets stating they would boycott the Sunday contests.  Philadelphia Eagles president Frank McNamee told the Associated Press: “Simply and flatly the game is being played by order of the commissioner.”  McNamee added he would not attend the Eagles-Redskins game but would go to a memorial service in honor of President Kennedy.

Meanwhile, the nation continued to mourn.  The president’s body was taken to the great Rotunda of the U.S. Capitol, where it would lie in state for 24 hours.  Among those who stood in line with his son and nephew was former Major League Baseball club owner Bill Veeck.  When members of the Kennedy family suggested he move to the front of the line, Veeck appreciated the gesture but declined, stating he was a “common man” who deserved no special treatment.  Standing for 15 hours on one artificial leg, Veeck’s pants became blood-soaked but he and his family endured.

As for Rozelle, years later he stated playing the games on that Sunday was his biggest regret as commissioner.  And for the record, the NFL was not the only sporting event to go forward on that tragic weekend.  The NHL continued with its slate – Boston at Toronto – as did the NBA.  And several college football games were played on the Saturday after the assassinaton, although others were cancelled.