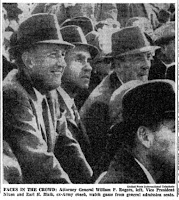 This is the way it was supposed to be, right?  No special treatment for politicians, no admission to luxury boxes, sit among the common folk.

And so it was that on Nov. 26, 1960 at the Army-Navy game, there seated in the general admission seats were Vice President Richard M. Nixon – just off a razor thin election loss to Sen. John F. Kennedy for the presidency – Attorney General William P. Rogers and former Army coach Earl Blaik.

As for the game, a crowd of 98,616 jammed Philadelphia Stadium to watch Navy beat Army 17-12.  One of the primary side notes to the game was the size of the program printed for the contest.  It was 200 pages thick, the largest program ever published for an Army-Navy game.  One reporter joked fans did not have to bring seat cushions to the game, all they had to do was buy and sit on the program.

After the game, Navy received a bid to the Orange Bowl, where any pols attending the game would presumably have to purchase general admission seats, a system some would suggest should still be in existence today.