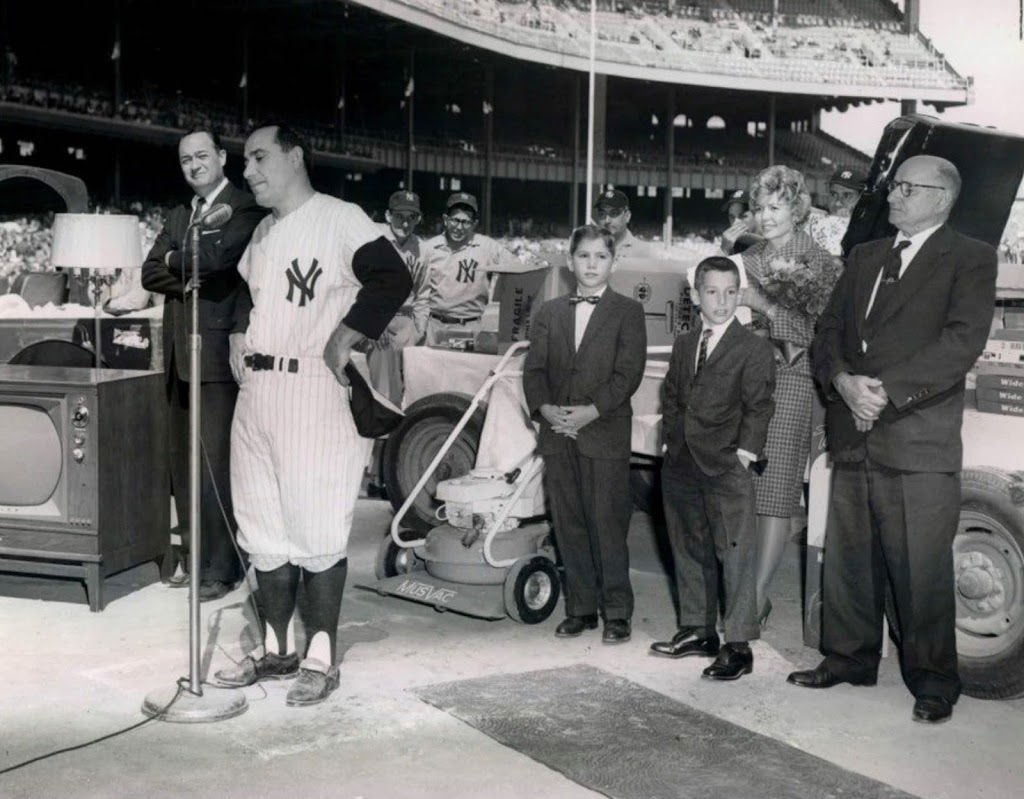 Sixty-years ago, Sept. 19, 1959, it was Yogi Berra Day at Yankee Stadium.  The Yankees honored their 34-year-old catcher on a Saturday afternoon, before a game against the Boston Red Sox.  Back then, ball clubs did not attract the crowds the way they do today.  To wit, even though both clubs were eliminated from pennant contention, on a sunny, weekend afternoon – the last Saturday of summer – only 24,000 attended the occasion.  Such an event would be a sellout today.

Yogi Berra speaks
According to the New York Times account of the event, Berra and his family were presented with 59 gifts in a pregame ceremony that lasted 35 minutes.  He was even given a color television set, leading master of ceremonies Mel Allen, the “Voice of the Yankees,” to proclaim that “Now, Yogi, you’ll be able to watch the World Series in color.”   Hopefully Yogi watched the series in color, because he would be a participant either as a player or manager in the five subsequent fall classics, as the Yankees started another one of their patented runs.

Several people spoke at the ceremony, including Yogi’s manager, Casey Stengel, and the event’s honorary chairman, Joe DiMaggio.  The Times even ran a photo of the “Yankee Clipper” applying make-up to Yogi in the clubhouse before the game, so he would look spiffy for the pregame honor.  And Stengel, in his generous remarks, called Berra the greatest player he had ever managed outside of DiMaggio.

In the top of the third inning, Red Sox catcher Sammy White came to the plate and handed Yogi a check from Red Sox management for the Berra Scholarship Fund.  And the first scholarship recipient was at the game, James Clevin of Ling Island.  He would attend Columbia University.

Berra admitted the most dreadful part of the event for him was speaking, but the account had the master of the malaprop pulling off the speech without a hitch.

As for the game, Yogi went 0-for-4, but the Yankees topped the Red Sox, 3-1, behind Whitey Ford’s complete game victory.  It took these two rivals 1:57 to play the game, or about as long as it takes these two combatants to play three innings today.  But all in all, it was a great day 60 years ago, as the Yankees honored one of their all time greats and my favorite baseball player.