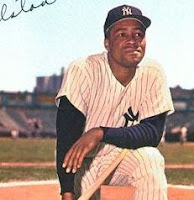 Elston Howard let it be known he wanted to become Major League Baseball’s first black manager, when he was a still a player.

Withiam’s piece quotes Howard’s daughter, Cheryl as saying “He definitely wanted to be a manager.” But Howard, himself, made no secret of his desires, while still in the prime of his playing career.

Before the start of the 1965 season, just two years removed from his American League MVP award, the Yankees’ catcher held a news conference to announce he was signing a $70,000 a contract for the upcoming season.  He had been given a $10,000 raise, after helping the Yankees to their fifth consecutive AL pennant.  However, at that same conference, James Tuite quotes Howard in the Feb. 19, 1965 edition of the New York Times as saying he wanted to play another five years, then coach and eventually become the first black manager of the Yankees.

“When my reflexes start to go and I can’t hold the fast ball, I’d like to stay as coach.  If, someday, the manager’s job were offered to me, I would accept.”

Howard, who in the off season ran a travel agency in New Jersey – the Times reported one of his first customers was the New York Mets Ed Kranepool – was traded by the Yankees in August of 1967 to the arch-rival Boston Red Sox, to help Boston in its pennant push.  He would eventually return to his beloved Yankees as a coach, only to be denied his dream of managing the Yankees.  One of his famous, coaching moments occurred when he was seen on national television in the Yankees’ dugout at Fenway Park, restraining manager Billy Martin, during the near brawl between Martin and Reggie Jackson.

Howard stayed with the Yankees as coach, until his premature death from a rare heart disease at age 51 in December of 1980.

Elston Howard would have turned 90 this Feb. 23.