Mar. 26, 2019 turned out to be a busy day for the New York Mets, as we explore in my latest edition of The Baseball Beat.  The Mets and pitcher Jacob deGrom have agreed to a contract extension and Mets owner Fred Wilpon is buying back more of his ballclub.

The Boston Red Sox and catcher Sandy Leon were in the news and so are uniforms, as Sports Illustrated examines uniform changes for the coming season.  You can read the article by clicking here.

We also take a look back at my interview with Willie Stargell.  At the time the former Pittsburgh Pirate was a member of the Atlanta Braves coaching staff.  The Braves were in Richmond to play their AAA affiliate, when I caught up with Willie and hosted a press conference at which he was featured for being elected to the Hall of Fame.

March 25, 1965 was a historic day in the history of New York Yankees managers.  The Yankees were coming off of their record-tying five consecutive AL pennant, as they prepared to host their crosstown rivals the New York Mets in an exhibition game in Ft. Lauderale, FL on that date.

In 1964 the Yankees stunned the baseball world, firing the popular Yogi Berra after one season as their manager, following a Game 7 loss to the St. Louis Cardinals in the World Series.  Berra was replaced by the man who managed the Cards to that championship, Johnny Keane.

Now the Yankees were hosting the Mets, the ninth time the clubs had met in either spring training or the annual Mayor’s Trophy game.  It was also the first time Yogi would cross paths with his former club.

Also in attendance on this intriguing day were Ralph Houk, the Yankees vice-president and general

manager, who fired Berra and Mets manager Casey Stengel, who preceded Houk as Yankees manager.  In other words, under the Florida sunshine in this not-so-usual spring training game were the previous four managers of the Yankees: Stengel, Houk, Berra and Keane.

The New York Times reported that day that there was no interaction, before the game, between Keane and Berra or Houk and Berra but that there was plenty of interaction and kidding between Berra and his former teammates.  Keane, however, did cross the field and enter the Mets dugout, accommodating photographers who wanted a picture with him and Stengel.

Berra told the media, “I’ll root for the Yankees – in the other league.”

In the game, with Hall of Fame pitcher Warren Spahn on the mound – he pitched six innings of one-run ball – the Mets beat the Yanks, 3-2, to take a 5-4 lead in the series.

The Yankees beat the Mets in St. Petersburg the next day, 8-0, with Berra, Stengel and Keane posing together for a picture.

As for the game in Ft. Lauderdale, the Times reported that most of the 6,130 fans in the Yankees’ ballpark were rooting for the Mets.  Those same Mets fans would have more to cheer about as the 1965 season wore on.  The Yankees never came close to a record sixth-straight pennant, finishing with their first losing mark in 40 years, as their dynasty started to crumble.

What a great story in the Mar. 22 edition of the New York Times about classical pianist Bela Szilagyi.  (The Times has a paywall but click here.)  Turns out Szilagyi was not only a boxing enthusiast – you can find some interesting stories about him on You Tube – but he was a massive archivist for the sport too.  His collection became so well known boxing fans, fighters and managers all borrowed tapes to watch them.

Szilagyi, who died in 2012 at the age of 78, video taped 55,000 boxing matches, starting in 1979.  The collection of 8,000 VHS cassettes is housed in his New York City apartment, with his widow Elizabeth the keeper of the flame.

The Times story notes that Bela continued her husband’s tradition, recording one on DVD during a recent Sunday night, when the Times interviewed her.  But keeping the flame has become too much and has become an “albatross.”  At age 76, herself a pianist and teacher, Elizabeth wants to unload the collection, which lines apartment walls and collects dust.

Szilagyi’s collection comes with the recordings and index cards for each tape and DVD noting details of each bout.  She tells the Times, however, that it is time to move on.  Elizabeth Szilagyi says the video library is up for sale but that she won’t give the tapes away and won’t toss them either.

It is not only a great read, but a reminder that boxing – once one of the USA’s most popular sports – still has an ardent following.

Shea Stadium, once the home of the New York Mets and New York Jets, almost had a dome. Fueled by the soon-to-be-opened Astrodome in Houston, New York city officials became convinced, enclosing Shea and putting a roof on it would enable the city-run facility to be used 300 days of the year, rather than the 100 times it was utilized in its first year of existence in 1964.

NYC officials had dollar signs dancing in their heads, especially since the last place Mets drew 1,732,597 fans in their first season and the Jets averaged 42,000 per game in year one at Shea.  Put a roof on the joint and expand the capacity?  Imagine the cash-cow the city would have?  There was even talk of hosting post season football in the enclosed facility.

So convinced capping Shea would be a home run, Ben Finney, the city’s Commissioner of Sports, said the stadium could have a dome in place by the start of the 1966 baseball season and that it would only cost $6 million.  Finney made his recommendation on Mar. 17, 1965.  A parking garage beyond center field was also part of the plan.

The New York Times thought the proposal was a slam-dunk, Charles Bennett writing in the paper: “In sport’s circles last night it was expected that the proposed stadium improvement would be pushed through to reality, just as the stadium proper was after William A. Shea, the lawyer for whom the stadium was named, got behind it.”

Finney was so confident of the dome becoming a reality, he evened named an advisory committee than included among others, a then vice president of the New York Yankees, Dan Topping Jr.  Imagine.

I seemed everybody was on board for a roof at Shea, but alas, it was not to be.

Would history have changed had the ballpark been given a hat?  Who knows?  Maybe on artificial turf, the ball doesn’t trickle through Bill Buckner’s legs and the Red Sox win that 1986 World Series.

Of course, Shea Stadium is no more, having been razed in 2008.  But its memories endure, leaving one to wonder how many more memories might there have been, if the New York politicos followed through on their dream.

I was so saddened to hear the news about Tom Seaver’s health problems and how he will be withdrawing from public life because of dementia.

Perhaps my favorite Tom Seaver memory occurred 50 years ago in that glorious summer of 1969.  My dad, two brothers and I were visiting my grandfather’s house, all of us big baseball fans.  It was a warm, July night and we were under my grandfather’s grapevine, along with my uncle. listening to the game on my small RCA transistor radio.  Remember those?

I remember we were riveted, as the Mets – suddenly in their first pennant race – were playing the first place Chicago Cubs.  Shea Stadium was packed and the roar came thundering through the small radio’s speaker, as Seaver kept mowing down one batter after another.  Twenty-five in a row.  When he retired the first batter in the ninth, we – and I’m sure millions of others – thought “Tom Terrific” might throw a perfect game.

It was not to be, as Jim Qualls, whose name I can recall to this day, singled to spoil history.

A check of the game story finds the contest took place on July 9, with the Mets winning, 4-0, behind Seaver’s one-hitter.  The game was played before 59,083 – at the time the largest baseball crowd in Shea Stadium history.  Seaver managed to dispose of Leo Durocher’s Cubs in a handsome 2 hours and 2 minutes, pulling the Amazins’ to within two games of the Cubs.  Through the miracle of You Tube, the actual radio broadcast of the game is available in its entirety.

Seaver’s near perfect game proved to be a prelude to a perfect summer of baseball for the Mets.  How ironic my favorite memory of him should be under a grapevine.  Seaver has spent his life-after-baseball, making wine.   In their announcement of his withdrawal from public life, Seaver’s family revealed that is where he will spend much of his time, in his “beloved vineyard.” 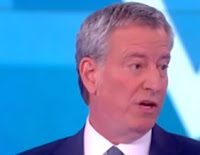 The Mayor of New York City, Bill De Blasio, makes no secret of the fact he is a dyed-in-the-wool Boston Red Sox fan.  He even attended the Red Sox-Orioles spring training game on Mar. 2 in Ft. Myers.  But what if the New York Yankees won the World Series?

De Blasio told the Boston Globe’s Peter Abraham: “I truly love baseball and if the Yankees win the championship we’ll give them an amazing parade and an amazing ceremony.  But I’m a true Red Sox fan.”

Say this about De Blasio, he is not one of those pretend baseball fans, trying to score political points.  He knows the game, its intricacies and follows the Red Sox and baseball closely, as evidenced by Abraham’s story.  In other words, he is a baseball aficionado.  What is interesting, however, is that he tells Abraham he has not set foot in Yankee Stadium since becoming mayor.

As for the Yankees using the mayor of their city’s words in support of the Red Sox as extra incentive, well, De Blasio rooted for the Red Sox last year too.  The Yankees need another starter in their rotation, more than a mayor promoting their archrival, as motivation toward a World Series title.